A collection of bits and pieces of Internet history. Focusing somewhat (but not exclusively) on: (a) the 1980s, when I first started using the Internet, and: (b) Ireland.
My first "Web page" in February 1989.
That's years ago.
I could have it green on my college computers ...

.. or orange on my home computer!

This is an adjunct to my page How my program passed the Turing Test where I describe how I hooked up an AI chatbot called "MGonz" to BITNET when I was at UCD in 1989.

These pages are a bit of an exercise in nostalgia. They were strange times, on the Net in the '80s. A whole world was happening, but you could never talk about it with anyone. In the '80s, we actually used the word the "Internet" to refer to the machines that used the TCP/IP protocol, which were only some of the machines on what was a vast interconnected network of networks. In retrospect, the whole thing was what we would now call the "Internet".

More on this: Some people say BITNET was not the Internet, because it didn't use IP. I think that is just being pedantic. BITNET had people in universities all over the world; it had world-wide email; it had real-time, interactive chat, one-to-one or in "Relay" chatrooms in places like CERN; it had world-wide remote file archives you could grab files from by issuing commands; it had world-wide "Listserv" email discussion lists; you could query if people were logged on across the world; it had disconnected "answering machines"; it had email to and from all other networks. The whole thing (BITNET plus connected networks) was the embryonic Internet. The protocol has simply migrated to IP since, that's all. If BITNET wasn't the Internet, then neither was Arpanet before it switched to IP in 1983.

When I was at UCD, you could send talk messages to BITNET nodes (including MGonz) from the TCP/IP machines as well, and when I was working on the TCP/IP machine at UCD, I used to get MGonz to copy me in on any conversation it was having. So even in the pedant's sense, MGonz was on the Internet.

In the '80s, this whole world of the embryonic Internet was invisible to the media, and that was just the way things were. When in the '90s the media finally started to cover my world, I was amazed, though I should have known it must happen someday. I finally put up a page about MGonz in early 1995.

This adjunct page is a bit more of a description of this "lost world" of the Net before it was "discovered".

Some of the people who were involved with the origin of the Internet in Ireland:

Putting a chatbot online in 1989

I attached MGonz to BITNET using   "MGonzNet" - my own version of the CHATDISC EXEC script.

The original CHATDISC was by Eric Thomas, inventor of LISTSERV. CHATDISC allowed you have a customised "answer message" when you received a chat message when you weren't logged on. I rewrote the script to call a program at that point.

More on my CHATDISC program in 1989

Far from promoting MGonz, I wanted to hide it from the people running UCD's computers, believing they would not like this kind of thing wasting the valuable network. So I had a "blacklist" of users who could not talk to it:

Here we see some of the major figures in the origin of the Internet in Ireland - Dennis Jennings, Michael Walsh, Mike Norris, Niall O'Reilly and Kieran Carrick.

I customised my own CHATDISC to not only provide access to MGonz, but also serve up files and provide other services:

Here is my first "Web page" in February 1989 (i.e. the first time I served files to the world when I was not logged on):

Tim Berners-Lee's very first internal proposal for the Web was in March 1989. The first Web server in the world went public at CERN in Dec 1990.

Another video of early sites. 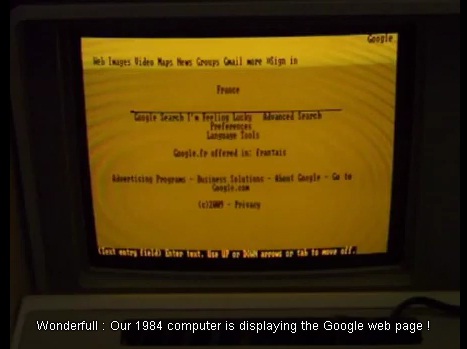 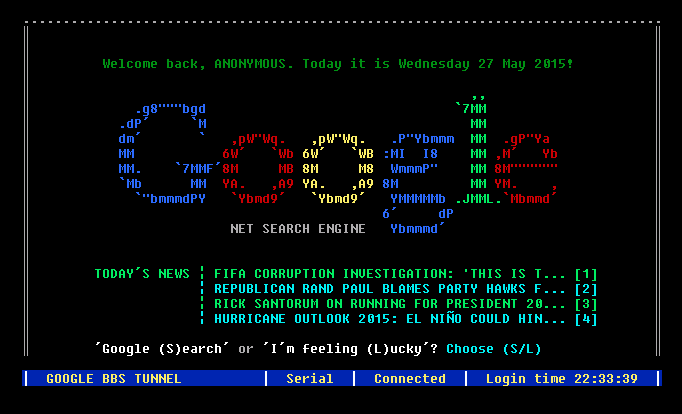 Genius: Someone designs a 1980s style front end for Google.
It is actually live and works!

History of the Internet

History of photos, audio and video